Since my last check-in post I've made a bit of progress. If I was grading on a curve I'd give myself 75%--definitely on track to pass but not spectacular.

The most obvious part of my project is to build a system that provides the good functions of social media while avoiding as many of the bad parts as possible. In that respect, the biggest piece of progress is that I've replaced the instagram link on this site with the stream link. Supporting and expanding what the stream can do is going to be one focus of my technical work. Right now it displays images, captions, and assistive text. I can upload pictures from my phone and use Slack to post them. This system allows me to experiment with different post formats[1] and demonstrate results and progress in a more visible way. I also think it will probably stand up to load pretty well, should that ever become a factor.

If "make the stream functional and interesting" is one category of tasks, there are two other categories that I'm actively prioritizing. One of those categories is to make posting as easy and convenient as it is on other social networking apps. I'm using instagram as my model for how easy it should be--I think that's a reasonable, not-too-high standard. Right now my solution falls short of that, but it is as follows:

I got an app from the app store that lets me upload a photo to AWS S3[2]. When I upload a photo, a cloud function wakes up to process it. That function takes the photo, resizes it for various common screen sizes, and stores it in a publicly-accessible place. Next, it generates a partially filled-out version of the form to post the image and posts it in slack.

If I want to add the image to the stream, I fill out the caption and alt fields in that structure and tell my application to post it:

When test_app posts the confirmation, I can expect to see this in the stream: 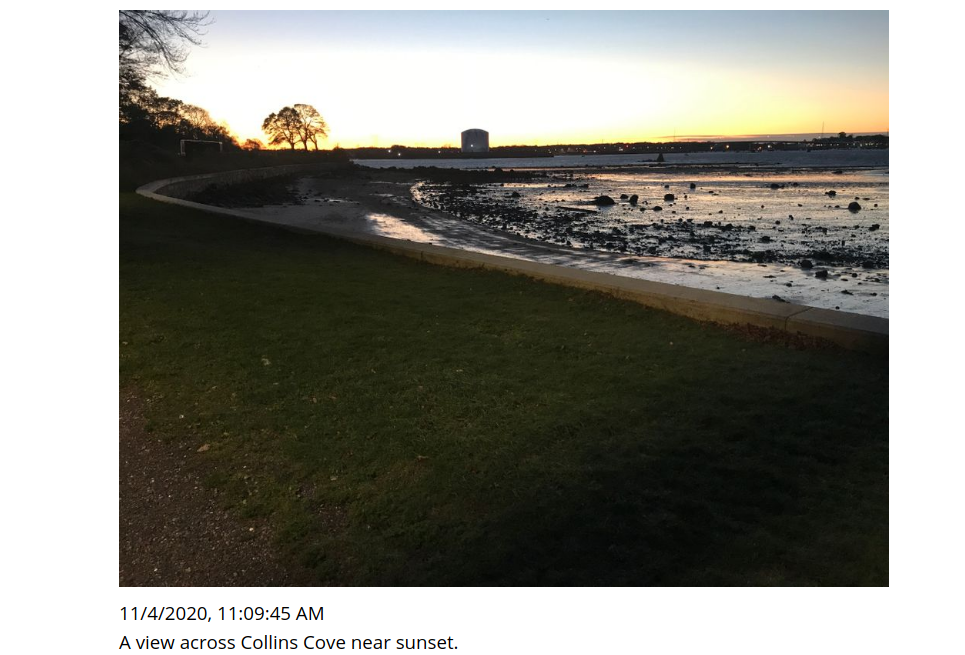 This flow works, and if I had to stop working on this project today, I'd probably keep using it. But it's not great, and it definitely doesn't meet the standard of something I would give to someone else. Improving this experience is going to be a priority for me.

As I get closer to an acceptable posting UX, I'll also think more about how to package up the entire system so that people can deploy and maintain it on their own. Right now that's in a similar state as the posting UX--it's not terrible if you're familiar with the tools, but it's not very accessible if you aren't. There are various reasons for leaving this until later. For one, the design of the posting UX will affect what needs to be deployed, so I won't necessarily be able to decide how to deploy things until that happens. Second, and more importantly, I don't want to package the system for distribution if I might drastically change it in a way that will cause problems for anyone with a running system. If you're interested in having your own system like this (hopefully as it improves people will be), let me know and I'll keep you updated when I have something I feel comfortable distributing. If you're somewhat experienced or feeling adventurous, head over to github whenever and let me know if you have questions.

Another major part of my project is to describe the important choices to make in social media systems, and why I'm making them the way I am. Since my last check-in, I've written a few posts on those topics. The post on almond-shaped systems describes the basic properties I want this system to have. The posts on privacy and security describe my framework for thinking about those topics--I'll expand on both as appropriate.

One post idea I've had for a while is to look closer at something called the hypertext transfer protocol (HTTP). This is the protocol that has been at the foundation of web pages for as long as web pages have existed. The reason I haven't written about it yet is that I was having a hard time presenting the information in a way that does justice to how interesting and important it is. But I'm getting there. The concepts we can see in HTTP are highly relevant to the challenge of building good UX, so I think those things might feed into each other.

That's all I've got for now. Let me know if you have questions, and have a good couple of weeks!